Feature Stores - A Hierarchy of Needs

its SageMaker Feature Store. Last month, Splice Machine, a big data platform, its own feature store too. Datanami even went as far as to call 2021 the (quoting Tecton.ai's co-founder).

It turns out that managing features, in our experience, is one of the biggest bottlenecks in productizing your ML models. — Uber

What is a feature store? Well, it depends on who you ask. Some articles define it simply as "the central place to store curated features". Others say it helps you "build features once; plug them anywhere" or "deploy models 100x faster". There's a wide range of definitions and I think it's because what a feature store is depends on what you need.

To learn more about feature stores and the needs they address, I dug into

The feature store hierarchy of needs

Maslow’s Hierarchy of Needs is a motivational theory in psychology. It suggests that there are five tiers of human needs and is often shown as hierarchical levels within a pyramid. The largest, most fundamental needs at the bottom must be satisfied before individuals become motivated to higher-level needs.

I think feature stores can be organized as a hierarchy of needs too. Some needs are more pressing than others (e.g., access to data, serving features in production). These essential needs have to be fulfilled before higher needs are considered. 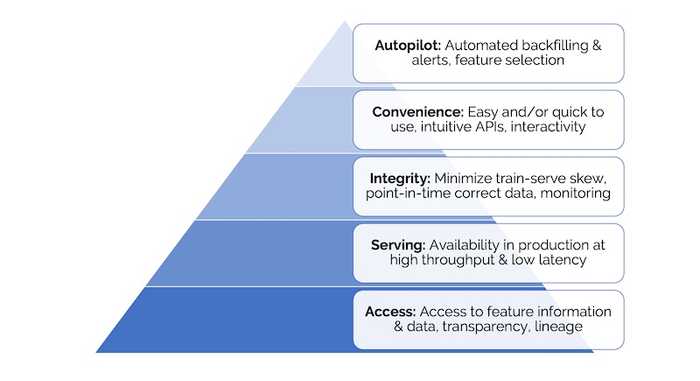 At the base, we have access needs. This includes access to feature information and data, transparency, and lineage. Transparency lets users view the logic and code creating the features while lineage lets them trace upstream sources. Together, they make it easier to find, share, and reuse features, minimizing duplicate work.

Previously, ML practitioners at Airbnb spent roughly 60% of their time on collecting and writing transformations for machine learning tasks. — Airbnb

Data scientists would typically implement features in individual silos, then hand over their code to a data engineering team to reimplement production-ready pipelines. This process of reimplementing pipelines can add months to a project and requires complex coordination between teams. — GoJek

Once lower needs are met, we can turn to integrity needs. Here, the prevalent need is minimizing train-serve skew. This means ensuring consistency between the features during training, and the features used as input when calling the model in production. Another common need is point-in-time correctness (aka time travel). This ensures that historical features and labels used in offline training and evaluation don’t have data leaks.

A lot of training is done in an offline way, and serving often happens, at least at Uber, in real-time environments. It is absolutely important to make sure that the data that you're using in real-time, at serving time, matches the data that is used at training. — Uber

Beyond that, we have convenience needs. The feature store needs to be easy and quick to use for data practitioners to adopt and realize the productivity gains. Such needs include having simple, intuitive APIs that can be used for training and serving, as well as interactivity to allow for faster development and debugging.

But remember, we are a platform, not an engineering team… How can we provide a tool for (users) so that we can give this power back to them, so that they can, without help from us, do all this work by themselves? — Uber

Finally, we have autopilot needs. These are needs to automate tedious work such as backfilling features, monitoring and alerts on feature distributions, etc. Some companies have implemented solutions to address these needs, but they are not widespread across the material I’ve researched.

Backfilling is a major bottleneck when you’re iterating on your training set ideas. Efficiently computing new training sets is a huge deal for speeding up your data scientist workflow. —Airbnb

Not all organizations will require all levels of needs though most teams can benefit from meeting the first two levels (access and serving) and part of the third (minimizing train-serve skew). The extent of each need may also vary. Organizations with fewer online ML use cases may have less demanding serving needs relative to DoorDash (i.e., millions of requests per second). Models and features that update intraday may have tricker needs for point-in-time correctness.

Now that we have an understanding of the various levels of needs, let’s take a look at how companies have built feature stores to address them.

What happens if access to feature information and data is low? Here’s a common experience across several companies:

Features representing the same business concepts are being redeveloped many times, when existing work from other teams could have been reused. — GoJek

(Not sure how I feel about this productivity gain, given my preference for data scientists to be more

. Nonetheless, this spilt between data engineering and machine learning might have been an artifact of how GoJek’s data team was structured, with the data engineering team mostly situated in India while the ML team was mostly in Singapore. Thus, Feast served as an interface for both teams to collaborate on.)

to encourage the sharing—and reuse—of features in a single location. Various teams across Uber could contribute features to, and use features from, Palette. For Uber, this minimized duplicate work, made ML outcomes more consistent, and accelerates the ML process.

To make features easy to find and use, it’ll also need aspects of data discoverability (though it can also be argued that this is a convenience need). I didn’t come across much discussion on data discoverability in the context of feature stores, but I suspect it’ll be very similar to what I’ve previously written about

At this level, the feature store mostly serves as a store, albeit a very useful one that contains crowd-sourced/curated features that ML practitioners can just plug-and-play. Nonetheless, it’s not much different from a data warehouse. What distinguishes feature stores (from data warehouses) is their ability to meet the second level of the hierarchy of needs—serving.

When training machine learning models, we usually train them offline with batch data. Then, when serving these models online, the same features need to be available in real-time. Here’s where teams stumble—how do we serve those features in production, at high throughput and low latency?

When shipping tabular-based models, we kept finding that many of the features we would input into a model while training it were not readily available in our production infrastructure. — Monzo Bank

by automating the synchronization of features from their analytics store (BigQuery) to their production store (Cassandra).

Creating batch and real-time features, and synchronizing between stores (source)

DoorDash took addressing serving needs to the extreme with their

. Here are the demanding technical requirements they had:

To build this feature store, DoorDash benchmarked several key-value stores—Redis, Cassandra, CockroachDB, ScyllaDB, and YugabyteDB—before sticking with Redis. More details on their benchmarking process and optimizing Redis in their excellent

Another approach is to compute features in real-time. This is how Alibaba serves

, where their Alibaba Basic Feature Server computes statistical features on user interactions (e.g., clicks, likes, purchases) in real-time. These features are then used for candidate generation. More about real-time recsys .

With serving needs met, we turn to integrity needs. There are two main pain points here:

. It takes snapshots of their offline and online data. These snapshots cover various contexts such as member type, device, time of day, etc.

However, creating snapshots for every context is expensive. Thus, they perform stratified sampling on attributes such as viewing patterns, device type, time spent on device, region, etc. These samples provide a good distribution of data to train and validate their models on. The sampling is done via Spark and snapshots are stored in S3.

A similar process snapshots online data from their hundreds of microservices. These microservices provide data such as viewing history, personalized viewing queues, and predicted ratings. Spark parallelizes the calls to

which fetches the data from various microservices. Similarly, the snapshots are stored in S3 via Parquet format. 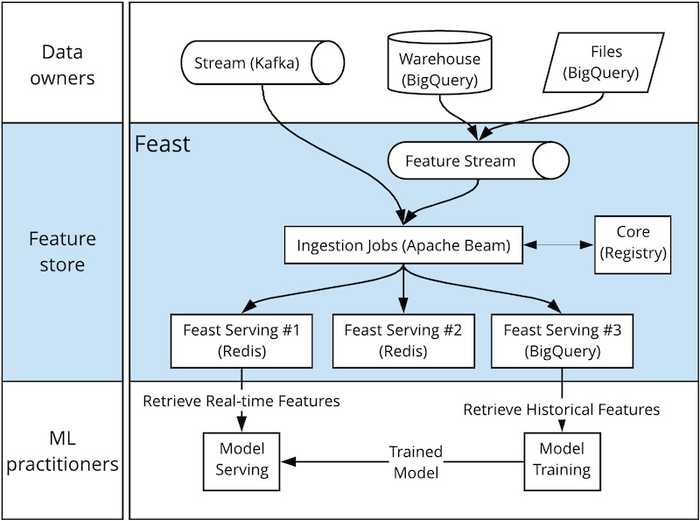 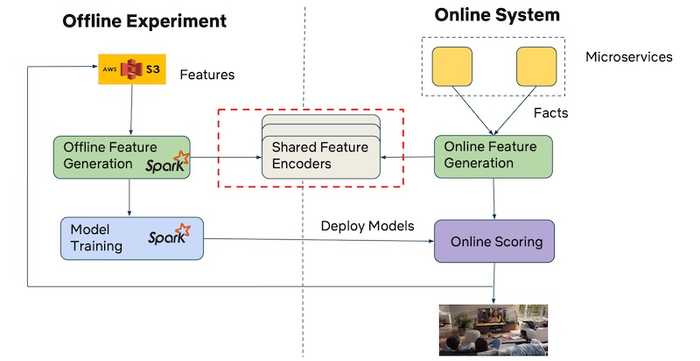 We’ve also seen how Uber approached this by keeping their offline (Hive) and online (Cassandra) feature stores in sync. New features in either store are copied to the other store, ensuring consistency between data used for training and serving.

We also need monitoring to ensure the integrity of features:

. It provides users with data quality scores daily, as well as alerts when anomalies are detected. It does this by: 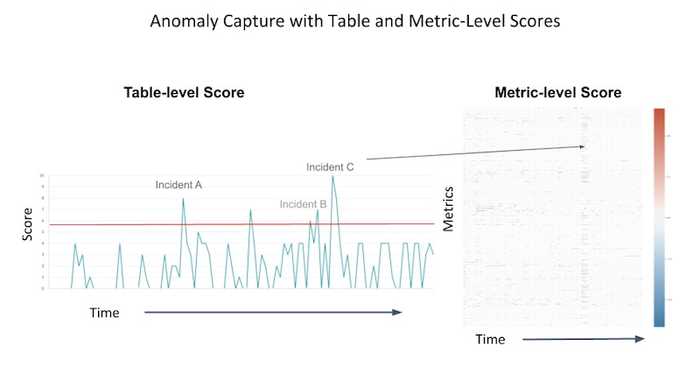 Data quality scores over time, and when incidents occur (source)

Convenience: Making it as easy to use as possible

I didn’t come across much content on convenience (or pain points) in the context of feature stores. Nonetheless, as practitioners, it’s important for our tools and platforms to be easy to use (e.g., PyTorch vs TensorFlow).

The best example I found comes from GoJek. They provide unified SDKs in Python, Java, and Go to simplify retrieving features from both offline and online stores. The API lets you use nearly identical code to get_batch_features() and get_online_features(), easing the transition between offline to online feature engineering.

For time-travel, Netflix provides simple APIs so data scientists can create point-in-time correct features and labels. Here’s an example of fetching a snapshot of viewing history for the movie

Building on this snapshot, users can perform time-travel to create features—for training and validation—by providing the following:

Autopilot: Automating as much as we can

At the top, we have autopilot needs. Not meeting these needs may mean your data scientists have to spend time on tedious, manual work—it’s not a blocker for using ML in production, though it can reduce development effort and operations cost. While some companies shared about addressing these needs, it’s not widespread in industry (yet).

Airbnb noticed that backfilling was a bottleneck when their data scientists iterated on ML experiments. Thus, Zipline includes a feature to backfill features automatically. A simple UI is provided where data scientists could define new features, specify the start and end dates, and how many processes to parallelize the backfill for. These features would then be added to their existing training feature set

Other ways to meet autopilot needs include:

provides metrics for analyzing cost and storage space. This makes it easy to manage (and drop) features tables that are not used, saving on cost. with automatic anomaly detection and notifications on data quality metrics, as well as daily data quality scores.

Conclusion: It depends on what you need

I hope it's clearer what a feature store is. If we're starting from ground zero, maybe all we need is

and , and a dash of . If we're building our own at big tech co, we'll probably want to consider and relatively early. Did I miss anything? Please reach out !

Looking to get started with a feature store?

is a great option to consider. It meets the needs of access and serving, and its consistent API makes it easy to use similar code for training and serving. Best of all, it’s open-sourced (read: free). Let me know how it goes!